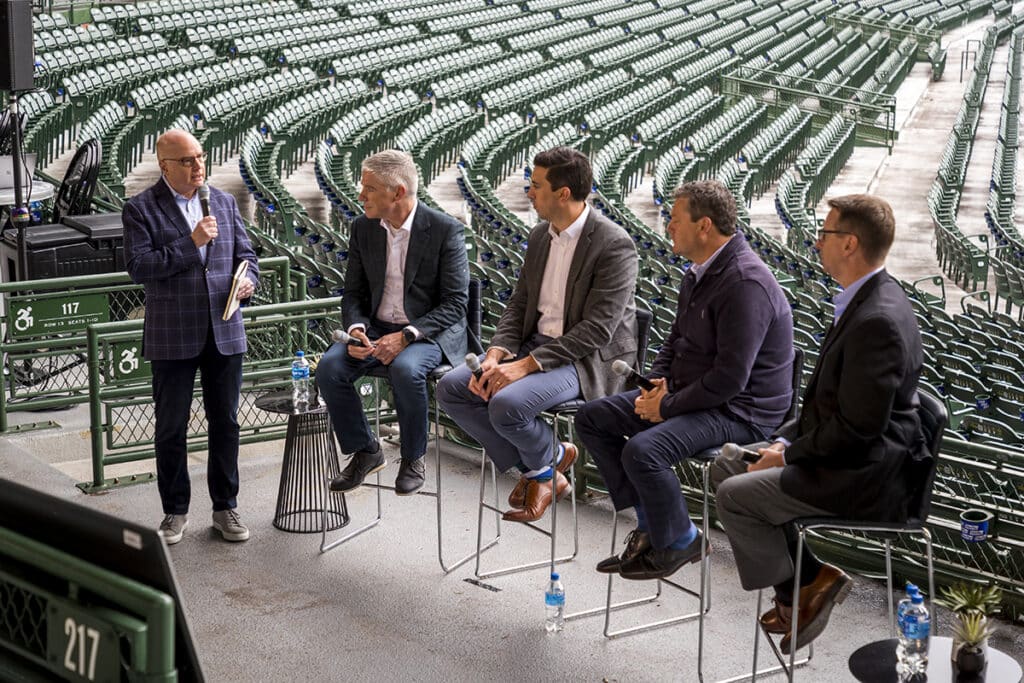 Hit a Partnership Home Run Every Time You Take a Swing

Two prominent sponsors of the Chicago Cubs joined the Sponsorship Mastery Summit during its day at “The Friendly Confines” of Wrigley Field.

The conversation between the sponsors, and their primary liaison with the team, yielded as many valuable insights as runs typically scored by the Cubs and their opponents when the notorious Chicago winds are blowing out of the ballpark, and the balls are flying over the ivy-covered brick wall in the outfield.

Especially noteworthy were the origin stories of both partnerships, and the many lessons sponsorship sellers can take away from them.

Although conventional wisdom says the best way to secure a new corporate partner is to develop and send a winning sponsorship proposal, there are plenty of examples of deals initiated in unconventional ways. In fact, that was the case with both of the Cubs’ sponsor panelists.

A Great Idea Beats a Mediocre Proposal
In the case of Reynolds Consumer Products, the Cubs approached the company with a single activation idea: Re-concepting the tarp that covers the infield during a rain delay to look like a giant piece of Reynolds Wrap aluminum foil. As Jeff Wilkison, the company’s Senior Vice President of Sales and Marketing/Tableware, shared, the idea was creative enough that it sparked a conversation at a company that was not active in sponsorship.

It’s important to note that, while a single idea sufficed to get the ball rolling, reaching a signed sponsorship agreement still required the team to gain an understanding of the company and its brands, provide much more information, and exhibit patience as Reynolds worked through a corporate restructuring.

As Alex Seyferth, the Cubs’ Vice President of Corporate Partnerships, noted, once Reynolds’ interest was piqued, it was the team’s job to build on an idea that would likely generate some great publicity (which it did) and expand into a full-blown partnership, bolstered by a business case for how it could meet the company’s objectives.

The Cubs learned early on that a partnership would need to include Reynolds’ Hefty brand party cups to make the investment worthwhile and, given the company’s decentralized structure in which individual business units control their own destiny, the Hefty marketing team would be involved in negotiations and final sign-off.

The team also learned Reynolds was still emerging from a recent change in corporate ownership that could slow the process, but the reorganization was also driving increased brand marketing, which made a greenlight for the sponsorship a more likely possibility (it still took another two-plus years for the company to move forward with the final agreement).

This tale of this sponsorship—now in its seventh year—was sparked by the following:

Mixing the Personal with the Professional is Encouraged
The Cubs’ partnership with insurance brokerage, risk management and consulting firm Arthur J. Gallagher & Co. began with personal ties and friendships between executives of both organizations leading to an informal dinner where team reps broached the idea of a sponsorship.

As Gallagher CMO Chris Mead described, “It didn’t start as a pitch. It wasn’t a series of presentations. It was a conversation about whether we could help each other.” As the Gallagher team learned about the Cubs’ assets, the property gained an understanding that any partnership would require the club to become a Gallagher customer.

Formal sponsorship presentations and meetings about Gallagher becoming the team’s insurance broker and risk manager followed in due course, resulting in a partnership between the two organizations that has the naming rights to Gallagher Way—a public plaza outside of Wrigley—as its centerpiece.