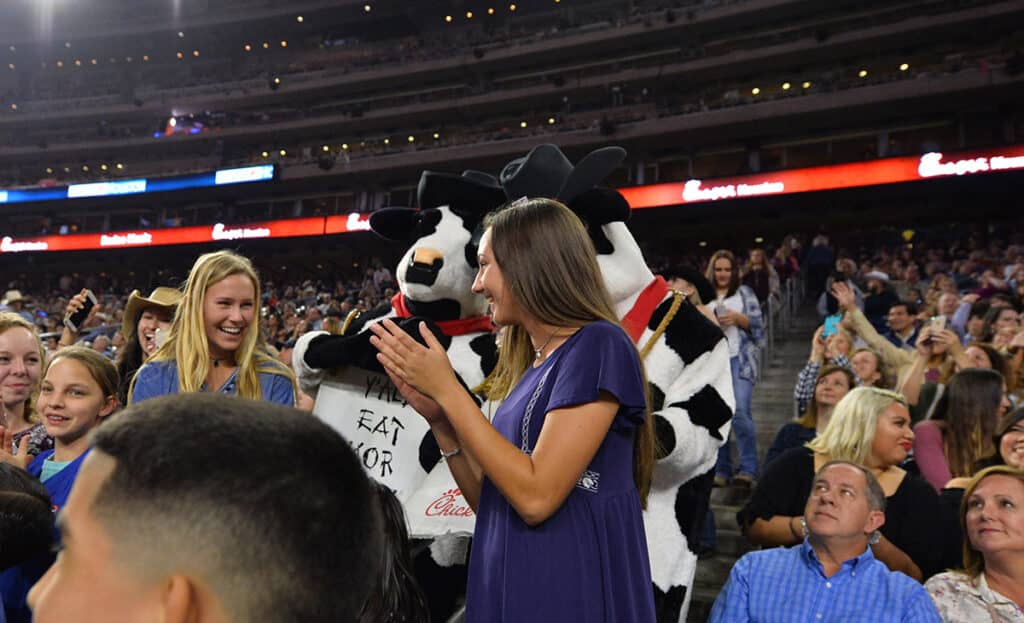 The Art of Rekindling a Broken Sponsor Relationship

Amber Burda, the Houston Livestock Show and Rodeo’s Executive Director of Sponsorships, Business &Corporate Development, candidly shared her story with the Sponsorship Marketing Association Audience about a sponsorship relationship gone awry. She provided several real-life lessons and shared encouragement that a relationship can be salvaged, and even become stronger, even when there is a misstep.

In HLSR’s case, Chick-fil-A had secured a sponsorship that was the envy of many of the property’s other corporate partners. The quick-service restaurant chain was the sponsor of the rodeo’s music series, which included live-fan engagement with 1.3 million attendees at NRG Stadium over the event’s three-week run – a presence afforded no other partner. Chick-fil-A’s activation featured its dancing cow mascots and was a fan favorite among rodeo attendees of all ages.

But when the sponsorship came up for renewal in 2018, Chick-fil-A passed. That decision came as a complete surprise to HLSR and created a learning opportunity for anyone in the business of securing renewals or new business from brand partners.

Always Look Closer
Despite the outward appearance of positive activity, with the inner workings of a sponsorship may not be obvious to anyone outside the sponsor’s inner circle. Or as Amber phrased it: “Assumption is not your friend!”

In Chick-fil-A’s case, the sponsor was not as thrilled with its rodeo experience in the same way the fans were when they were cavorting with the cows and sharing the experience on social media. HLSR, however, never asked the brand about the sponsorship’s performance.

This is an error commonly made by properties that are doing well in terms of selling out events, earning great media coverage, winning games, etc. Rights holders that may be struggling in those areas are often more apt to do what every property should: Check-in and ask questions.

It’s a sponsorship best practice to establish a prospective sponsor’s objectives and the ways it will determine success during the sponsorship sales process. But as HLSR’s experience shows, it is also crucial to continue those conversations after an agreement is signed. A brand’s goals may change, or new marketing programs may accomplish the same purpose, shifting the priorities for the sponsorship.

Ideally, the sponsor would raise their hand in such circumstances, but that doesn’t always happen, which means the property doesn’t find out the sponsorship isn’t meeting the partner’s needs until it’s too late.

Properties can seek that information in a variety of ways. The most effective is a one-on-one conversation with direct questions about whether the deal is meeting expectations and if changes to benefits are necessary.

If it’s not possible to get on a sponsor’s calendar for a temperature check, surveys sent to all partners asking comparable questions can also do the trick. Even a quick questionnaire that asks sponsors to rate their satisfaction level can alert the rights holder that follow-up action is needed with those who are not fully satisfied.

Don’t Give Up
If Amber’s story ended there, it would still be a worthwhile lesson. Thankfully, this story has a happier ending, which provides an additional example of the power of perseverance.

After the sponsorship ended, Amber invited her Chick-fil-A contacts to an NRG Stadium suite during the 2019 event. It provided a way to stay in touch, while creating an opportunity to gain new perspective on the rodeo and its component events. Following the event, she was able to secure a meeting where she asked the questions she wished she had asked a year earlier.

The answers were eye-opening. The bottom line: Chick-fil-A didn’t renew, because it could not track the sponsorship’s impact on sales. There was a lack of integration between its activation and key brand elements, and Chick-fil-A could not connect the exposure, social media love and sampling effort to store visits and purchases.

Equipped with that information, the HLSR team presented a revised package of assets to the brand, including on-site distribution of coupons and other incentives to drive store traffic. The property also swapped the previous agreement’s one-day use of an 80-person suite for tickets that could be given away in stores.

The proposal also included a digital game that connected fan selfies to a virtual bull ride through the streets of Houston, visiting Chick-fil-A locations and using the restaurant’s app along the way. The content became part of the on-site experience on video boards and continued online throughout the year.

Those changes prompted Chick-fil-A to rejoin HLSR as a sponsor in 2020, and the partnership is ongoing.